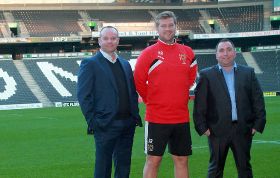 The logistics arm of banana giant SH Pratt & Co. has teamed up with football side MK Dons.

The two-year deal will see the Luton-based firm sponsor the Under-16s and Under-18s academy teams, along with offering several key business development benefits.

Kinship Logistics, which wanted to give something back to the employees in recognition of their efforts over the last 12 months, initially became involved with MK Dons - who play one division below the English Premier League - in one of its membership schemes.

The firm has now decided to become more involved as a club partner, and Tony Hunter, logistics director at Kinship Logistics believes this will have a real impact.

He said: “We are delighted to become official partners of the MK Dons. It is great to be part of such a dynamic club.

“We believe that sport for the younger generation presents fantastic opportunities and off the back of that we are proud to be sponsoring the under-18s and under-16s academy teams.”

"We value the support of Kinship, especially with their contribution as official club partner, and look forward to our future together.”