Ukraine can become the 'food basket of Europe' 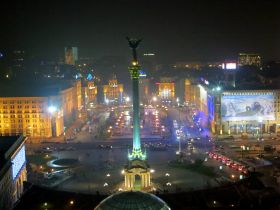 Ukraine has the potential to become the "food basket of Europe", the director of a key British fresh produce business has claimed.

Colin Galbraith, sales and marketing director at Moorhouse & Mohan, believes that the Eastern European nation has enough resources in place to step up several gears and transform itself into one of the major suppliers to EU markets.

Galbraith believes his own company is well-placed to ride the crest of this wave, having made significant investment in Ukraine in recent years.

He told FPJ: "If Ukraine continues to court the EU and the political situation with Russia calms down, then Ukraine will become an enormous factor in the fresh produce industry over the next generation

"With vast amounts of high quality land with over four and a half million acres of very fertile soil - which can be easily irrigated - in the south of the country alone, Ukraine could become the food basket of Europe once again, as it was in the late 19th and early 20th century.

"Water problems which are being encountered in other parts of Europe and particularly the Iberian peninsula are not a problem in the Ukraine, due to the investment during the Nikita Khrushchev era in the 1960s in huge dam and irrigation waterways.

"Being such a vast country, you can go from a Mediterranean climate in the south - with a winter which lasts about 6 weeks - to the far more easily recognised temperate country in the north, with its snowy and muddy images."

Moorhouse & Mohan's JV business in the Ukraine has recently undergone a multi-million-pound investment in cold storage, packing lines and farms, and it is hoped that it will see a massive upturn in both raw and added-value products over the next five years - exported to the UK, among other areas of Western Europe and Scandinavia.

Galbraith added: "The project has generated an enormous amount of interest in the UK and with the investment already made the company feels it is way ahead of any competition."