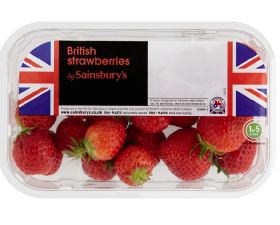 Strawberries have become the latest casualty of post-Brexit hikes in the price of food. A fall in UK tunnel production and an earlier-than-usual end to the glasshouse season has left retailers relying on more expensive imports from Belgium and the Netherlands, resulting in significant price increases that are set to continue for at least the next few weeks.

The latest figures from British Summer Fruits show that UK production to the week beginning 3 October is down 34 per cent year-on-year.

Adrian Olins of BerryWorld said the ‘double whammy’ of reduced supply and the sliding pound will mean more expensive strawberries until at least mid-November when the Egyptian season gets underway.

“Price rises are inevitable, I don’t see a way around it,” he told Fruitnet. “The market is undersupplied and will remain so until Egypt comes on stream.”

According to one importer, the price for an 8 x 500g box of Belgian strawberries had risen to £32 this week, compared to the usual £15-20.

“The good news for the industry is that demand is up 14 per cent (to early October), so we can expect to see more berries next year as producers move in on what is becoming an increasingly profitable window,” he said.