Brexit so far not as damaging as predicted and of secondary importance to technological advancements, says IGD chief economist 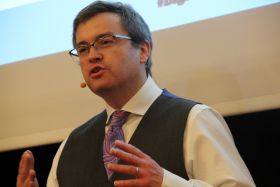 Technological advancements and the growth of robotics will prove more important than Brexit in reshaping the grocery industry, the IGD’s chief economist predicts.

James Walton from the food and grocery research charity suggested that the economic impact of Brexit should not be exaggerated, arguing that it is of lesser importance than wider political changes affecting the food industry.

Speaking at a Brexit briefing at the IGD Big Debate 2016, he said: “It is quite difficult to pick out any sign of awful economic consequences starting to unfold and actually a lot of the macroeconomic measures are still pretty positive.

“Brexit, undoubtedly, is going to create really profound changes for both shoppers and businesses, and that applies particularly to the grocery industry because we have such complicated and extensive international connections. But I would argue that Brexit is just one of a series of much wider political changes that we have to be aware of.”

One of these is the emergence of new technologies, which, according to Walton, have the potential to “undermine a lot of the advantages of international trade and scale economies.” This would make a post-Brexit shake-up of trade agreements and reduce the extent to which globalisation is a driver of prosperity and growth - a movement that walton says is "running out of steam".

He also highlighted the fact that advancements in artificial intelligence and robotics will soon either supplement or replace human labour, arguing that a “fourth industrial revolution” is upon us.

Walton acknowledged the damaging impact of post-Brexit currency depreciation, due to the rising cost of fresh produce, meat and beverage imports, but pointed out that grocery prices remain below levels seen two years ago.

“You might expect that the cost change would be more dramatic,” he said. “That weak price response is down to a couple of things. It’s partly because prices globally for a lot of commodities are sill pretty low. But we’re also seeing substitution effects – manufacturers in the UK responding to weaker sterling by sourcing more in this country. That substitution will certainly offset depreciation.”