G’s joins forces with RSPB to save turtle dove 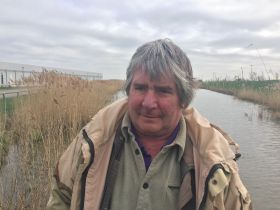 Steve Mumford at May Farm

G’s is set to collaborate with the RSPB in a bid to save the turtle dove from extinction and boost biodiversity on its recently-completed mushroom farm.

Steve Mumford, the head groundsman at May Farm in Littleport near Ely, wants to gather valuable data on the endangered bird, which has suffered a 91 per cent UK population decline since 1995.

As part of a five-year case study, backed by the RSPB’s Operation Turtle Dove scheme, the plan is to track the bird’s migration from the UK to West Africa, where it spends the winter months. To achieve this Mumford wants to create a habitat for the bird at G’s farms in both locations.

At the vegetable supplier’s mushroom facility in Cambridgeshire Mumford is planting trees and installing feeding strips to attract the rare bird species to the farm. And with funding and support from the RSPB, he plans to satellite tag turtle doves, with the hope of then luring them to the company’s radish and spring onion farms in Senegal.

The idea is to document the 3,000-mile migration journey and gather valuable data to help save turtle doves from UK extinction.

“We’ve planted a native tree and shrub arboretum, which is unique in Britain,” said Mumford, who has been working at the Cambridgeshire mushroom farm since construction work began in 2012.

“On either end of the arboretum we’ve planted two really thick spinneys [small areas of trees and bushes], which turtle doves need for nesting cover,” he added.

“In front of them we’re going to put feed strips with the specific seeds that turtle doves eat. It would be totally amazing if we ringed or satellite tagged a turtle dove on May Farm and then caught it on one of our other farms in Senegal.”

The RSPB proposed that G’s help them with the case study after May Farm was granted membership of the Guild of Conservation Grade Producers in October last year – the only mushroom farm globally to attain this status. The Conservation Grade’s ‘Fair to Nature’ scheme aims to reverse declines in farm wildlife by creating and managing areas of nesting and foraging habitat on farms.

The accreditation recognises Mumford’s mammoth efforts to boost biodiversity on the site, planting some 21,500 trees in the past four years. As well as turtle doves, Mumford is creating habitats for corn bunting, sky larks, grey partridges and yellow wagtails, among other species.

James Meers, who head up G’s mushroom growing operations, said: “We could have just built a mushroom facility and left the rest of the land as a field, but developing the area’s biodiversity makes it a nice place to work. It makes local people want to engage with it.”

As well as focussing on biodiversity, the mushroom facility fits with G’s sustainable model of agricultural production, being entirely powered by a biodigester fuelled by the firm’s crop waste. Reclaimed water and heat from the AD plant are used in the farm’s growing tunnels.

The farm, which was officially opened in October 2016, produces 165 tonnes of mushrooms a week for sale at Tesco.