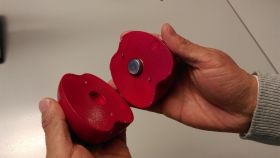 A fruit-shaped sensor that monitors core fruit temperature has been designed to ensure greater freshness in transit, Swiss researchers say.

The sensor, which comes in apple, orange, banana and mango varieties, mimics the size, shape and composition of real fruit. It is packed in boxes with produce in transit to closely monitor its temperature.

Although fruit is already inspected regularly during transit, some of it is avoidably damaged or may even perish when transported, compromising food quality and safety.

Although existing sensors can measure the air temperature in a freight container, it is the core temperature of the individual fruit that is decisive for fruit quality, according to the Swiss Federal Laboratories for Materials Science and Technology (Empa), which is currently conducting trials on the new sensors.

Up to now it has only been possible to measure core fruit temperature "invasively" by inserting a sensor through the skin and into the centre.

To carry out the measurement, the technician usually takes a piece of fruit from a cardboard box in the front row of pallets in the container, which in turn distorts the result. Fruit that is closer to the outside of the transport container is better refrigerated than fruit on the inside.

The new technology will allow researchers to identify any problems with the fruit cooling process when the produce arrives at its destination. Not only will this allow temperature adjustments to be made in future, it is also important for insurance reasons: if a delivery does not meet the quality requirements, the sensor can be used to establish the point in the storage and transport chain at which something went wrong.

Separate sensors are being developed for each type of fruit and even for different varieties. So far sensors have been developed for Braeburn and Jonagold apples, Kent mangoes, oranges and Cavendish bananas.

In order to simulate the characteristics of the different types of fruit, the fruit is X-rayed, and a computer algorithm calculates its average shape and texture.

Researchers then determine the exact composition of the fruit's flesh – usually a combination of water, air and sugar – and simulate this in exactly the same ratio in the laboratory, substituting the original materials for a mixture of water, carbohydrates and polystyrene.

A 3D printer is then used to create the false fruit, which contains a sensor at its core.

Although similar fruit core simulators already exist in the field of research, they are not yet sufficiently accurate, according to Empa project leader Thijs Defraeye.

One such design to have been used is balls filled with water with a sensor inside. "We have conducted comparative tests," said the researcher. "And our filling provided much more accurate data and simulated the behaviour of a real piece of fruit much more reliably at different temperatures."