Honeyberries: Are they the fifth berry?

Higher prices, lower costs and less competition may tempt northern growers into honeyberries, according to speakers at the Global Berry Congress 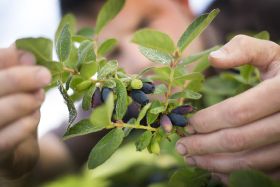 Honeyberries, or haskap, are produced in northern climates

A breakout workshop looked at the potential for honeyberries, also known as haskap, as ‘the fifth berry’ with potential in a variety of different markets.

Speakers from a range of producer countries discussed the benefits of producing honeyberries, ranging from their status as a superfood with higher levels of antioxidants than blueberries, to their suitability for northern climates and low production costs.

Usually a product is firstly marketed in its fresh format, before being developed for the convenience and processed markets, but for honeyberries this should be the other way round, according to Jan Marc Schulz of Dutch importer SFI Rotterdam.

“The potential is there. A lot of growers are considering it now as it has margin," he said. "The fresh market will come, but I think we have to wait a bit because there’s not enough product available. But it will come.

“If you try and introduce a product to the fresh market too early without variety and flavour knowledge, you will ruin the name. In a jam, smoothie or alcohol product you can disguise any flaws in flavour.”

Schulz said there is some confusion over whether fresh honeyberries can be marketed inside the EU due to the Novel Foods Legislation, but noted this is due for review in January of next year. This summer's market introduction in Switzerland, which is outside of this legislation, will provide valuable consumer reaction, he added.

Logie Cassells of Canadian supplier LoveHoneyberry said the group’s goal in Scotland is to create a 5,000-acre grower group to produce fresh honeyberries.

“You have to sell the story first, and taste and quality must match this,” he said. “There are a lot of names for this berry and none of them are right or wrong, it should all be grounded in your story. Whether that’s haskap for the oriental or Japanese interpretation, or Honeyberry gin produced in Scotland.

“It’s perfect for smoothies. And it’s very exciting that you can produce a red wine made from Honeyberries in Scotland for exports. Personally, I’m very excited about the alcohol potential – it’s easy profit margin,” he added.

Honeyberries are primarily grown in Japan, Russia and north America, although there is established production in Germany, Poland and Scotland, as well as northern China.

Peter Stremer, of German research institute Landwirtschaftskammer Nordrhein-Westfalen, said the benefits to growers include less pressure from Mediterranean berry growers where the climate is too hot, low production costs and the potential for higher prices.

He said honeyberries can also avoid the life cycle of the SWD fruit fly pest due to an earlier harvesting window.

“In my opinion, we need to develop some quality specifications as there is currently a lot of inconsistency. It has a short shelf life as a fresh product so farmgate sales have an advantage,” he added.