The Big Debate does Brexit 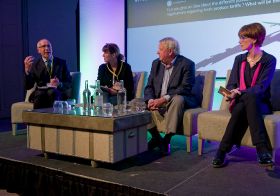 Government support for the industry, freedom of trade post-Brexit and a need to grow more fresh produce domestically were some of the topics touched on during a lively Big Debate session at FPJ Live 2017.

Brexit was, as expected, a hot topic, and when asked what the panel wanted for UK horticulture from any future government Brexit negotiations, Capper said that trade and market access was vital for the industry.

"Other than labour, the most important issue has to be trade, and ensuring it's a level playing field" she outlined. "The NFU has been quite clear on wanting, if possible, access to the single market and making sure we have a simple way to trade. There are lots of difficulties in that statement, but we want to know that can still bring in the things we need without tariffs, and we want to know that on exports we will still be able to trade not just with Europe, but also with the rest of the world."

On Brexit, Marston admitted that there were concerns over the potential availability of resources such as plant material, particularly for the berry industry.

"Certainly in the berry industry we bring in huge amounts of plant material from the Netherlands every year, and we are concerned that there are restrictions on the importation of finished plant products – the idea of any protectionist measures, be that in the shape of tariffs or plant inspections over and above the current EU standards, would be a serious concern given that the bedrock of our industry is high-quality plant material on an annual basis."

Taylor said that, quite simply, the Food Foundation wanted to see greater investment from the government for the farming sector,

"I think we would really like to see a much better deal for horticulture coming out of government support for farming, given that horticulture hasn't benefited as much as other sectors in the past, and we've got a really strong case to make for investing the sector to drive up and support the increased consumption of fruit and vegetables," she explained. "We can actually say that investing in British horticulture is actually part of tackling our diet crisis in the UK, which is the thing that is crippling the NHS in Britain. Overall, we'd like to see a much stronger government commitment to the sector, both through whatever the new common agricultural policy for the country looks like, and also through, ideally, some sort of sector deal driven through industrial strategy."

Representing a wide range of growers in his role at British Growers, Ward highlighted the importance of future Producer Organisation (PO) funding and the Customs Union post Brexit.

"We also have to think about the impact that coming out of the Customs Union has – what arrangements will be in place?" Ward added. "Ninety-six per cent of imports into the UK come by sea, Dover has 7,000 lorry movements a day and they have to get them through in 20 minutes because there is no space to stack them up. If we try and move to some kind of physical inspection scheme, just what is going to happen to our ability to bring fresh produce into the UK? I'm not sure some of these practical issues have really been thought out. Politicians say "No, we don't want the Customs Union", but then how on earth are you going to work out the imports system, and that's hugely important with 50 per cent of our fresh produce coming in from overseas."