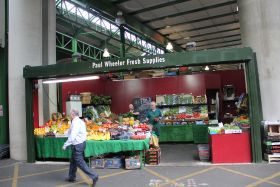 Borough Market remains closed but will “pull together” after a terror attack on Saturday night (3 June) left seven dead and 48 injured.

The market is working with the Metropolitan police in their investigations and remains closed alongside the surrounding area, a statement said. Police have so far arrested 12 people in connection with the attack, where a white van ploughed into pedestrians on London Bridge before continuing onto Borough Market and three attackers carried out multiple stabbings in pubs and restaurants.

Chair of Borough Market trustees, Donald Hyslop, said: “We are deeply shocked by the events that took place around Borough Market. Our thoughts are with all those affected by this senseless act.

“Borough Market is in the heart of a strong, diverse and creative community, a community that supports each other and will pull together to show solidarity in the face of this callous attack.

“We would like to thank the emergency services for their bravery and quick response. We continue to work with the Metropolitan police with their investigations and the Market and surrounding area remains closed at this time.”

The attack has prompted outpourings of support and solidarity on social media, as well as sparking black humour as the hashtag #ThingsThatLeaveBritainReeling began trending in response to a New York Times article suggesting that Brits have been cowed by fear.