Likely kingmakers will push for a frictionless border between Northern Ireland and Republic in Brexit negotiations, DUP MP suggests 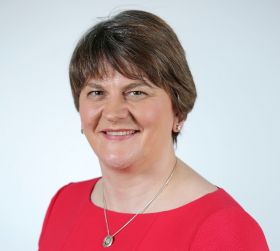 The Democratic Unionist Party (DUP) has indicated it will push for a “soft” border between Northern Ireland and the Republic as the party closes in on a ‘confidence and supply’ deal with the Conservatives.

With negotiations between the two parties ongoing, and a deal to form a minority government reportedly 95 per cent complete, an agreement is expected to be reached next week.

With this eventuality in mind, one of the party’s ten Westminster MPs Jim Shannon tried to allay concerns that there will be a hard border between Northern Ireland and the Republic that could hinder trade.

He told The Scottish Farmer his party was in a strong position to fight for farmers and fishermen in Brexit talks, which will begin as planned on Monday.

“Everyone fears these talks of a hard border,” he said, “but I agree it must be a soft border that will ensure the goods from both countries can move easily between them.”

Given the high volume of fresh produce trade between the UK and the Republic of Ireland, the free movement of goods and workers between the two countries is an important issue for companies on both sides of the border.

Nearly a fifth of the UK’s food and drink exports go to the Republic of Ireland and in March industry bodies from across the British food and drink sector wrote an open letter to various government departments calling for “frictionless” tariff-free trade with Ireland to continue post-Brexit.

According to The Scottish Farmer DUP MPs have promised that the party will fight for a secure future for farmers and fishermen in Northern Ireland and across the UK.

“With ten members elected to Parliament we will make sure both the farming and fishing industries will be discussed to the benefit of both in Westminster,” Shannon said.

“We were always Brexiteers and made sure to get the message across to Westminster that the European Union’s Single Payment system to farmers must be replicated when the UK leaves the EU”.