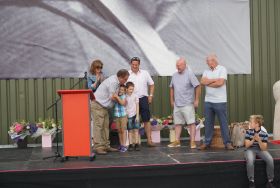 Clive Goatham is presented with his award by his grandsons

Leading Kent topfruit grower AC Goatham & Son has marked its 70th anniversary with a birthday bash attended by 600 of its team, friends, family and business contacts.

Held on Saturday 24 June at the company’s HQ at Flanders Farm, Hoo, the event also included a charity auction that raised £13,000 for Help for Heroes.

Several members of the company also celebrated personal milestones during the event, including senior partner Clive Goatham with 50 years in the business; director Steve Everard with 40; technical director Nigel Stewart with 10 years with the business and 40 years in fresh produce; packaging and quality manager Debbie Roberts with 25; and MD Ross Goatham with 20.

Commercial director Carol Ford said: “We hosted a fun-filled, family friendly afternoon and evening and it was wonderful to see so many families come along to join in.

“The business has changed considerably since it was started in 1947 by Clive’s parents Arthur and Phyllis Goatham, who began buying fruit directly from the farm gate, picking it, packing it and taking it to wholesale markets.

In July, the business will be raising more funds for Help for Heroes and the Kent Sports Trust with the first-ever Goatham's Great Kent Cycle Ride. The ride will cover nearly 200 miles across the county with Dame Kelly Holmes and former Kent and England wicket keeper Geraint Jones MBE taking part.