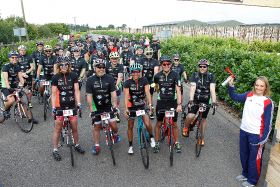 Dame Kelly Holmes has led the first-ever Goatham Great Kent Cycle Ride over a 220-mile route around the county and raising over £45,00 for Kent Sports Trust and Help for Heroes.

The race was started by gold medalist Charlotte Evans at Goatham’s Flanders Farm, Hoo, and attended by 75 riders over three days.

Led by Holmes, the riders covered around 70 miles on the first day, reaching Tunbridge Wells and finishing in Brands Hatch. Day two headed south towards Maidstone and Canterbury, where they were joined by former Kent and England wicket keeper Geraint Jones MBE.

Day three began with a steep climb out of Dover before the riders headed north via Faversham and reaching the finish in Hoo around 5.30pm.

Goatham’s commercial director Carol Ford, who participated in the race, said: “We were delighted to be approached by Kent Sports Trust earlier this year with the idea behind the ride to encourage people of all cycling abilities to join in. This first year has been a fantastic success and we look forward to planning the 2018 ride with them.”

CEO of Kent Sports Trust Foundation, Steve Wolfe, said: "The commitment shown by all the riders over the three days was truly incredible and it just goes to show what's possible if you really put your mind to it.

"We set out with the mission of trying to inspire more people to get on their bikes and with the support of ambassadors like Dame Kelly Holmes and Geraint Jones MBE, I believe we've achieved that."