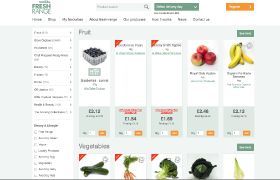 Fresh-Range price matches with multiples on some lines

A new food retail platform that offers higher prices to producers and links consumers with local food has raised over £300,000 through crowdfunding site Seedrs.

Fresh-Range, which is based in the South West, was set up by ex Proctor & Gamble manager Rich Osborn alongside tech entrepreneurs Steve Osborn and Lee Butler.

The company says its USP is its technology and software capabilities, which have helped to create a “light and fast supply chain as an alternative to the mass food system”. Producers can now access B2C and B2B markets through one platform for the first time, it added.

The company sources directly from a range of local producers as well as through Bristol wholesale market and claims to match or undercut the prices of multiple retailers on some products.

“Since 2014, dozens of local food producers and suppliers have joined the fresh-range platform cutting out financially and environmentally expensive mass haulage and storage.”

The first £1 million of funding was provided by investors, with the crowdfunding money designed to help further expansion.

Osborn said the company’s ambition is to have a one per cent share of the UK grocery market across multiple platforms and across the country. He also intends to grow turnover to £400 million, from its current total of around £580,000.