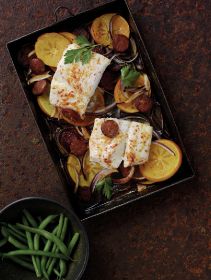 Persimon sales are supported by recipe ideas and other consumer engagement

The Spanish Persimon season is gearing up with the return of the Foods from Spain campaign preparing to support sales in the UK market.

Last year, production reached over 100,000 tonnes with 80 per cent destined for export, and more than 3,500t sent to the UK market.

PDO-certified fruit accounts for around three quarters of all Spanish persimmon sold in the UK, with production and marketing controlled by the Kaki de la Ribera del Xúquer regulatory council.

The certification scheme ensures that Spanish Persimon is the Rojo Brillante variety and is grown in the Ribera del Xúquer region, as well as requiring growers to pass certain traceability tests.

Along with retail support, the Foods from Spain campaign is working with chefs and journalists to showcase the USP of the fruit in restaurants and magazines during the season.

Rafael Perucho, head of the regulatory council, said: “Supporting the market is very important. Persimon is relatively unknown to most consumers, so the campaign helps them to understand the fruit and start adding it to their shopping baskets.

“We want people to understand that Persimon is certified in the same way as a P.D.O. Manchego cheese, Serrano ham or Riojo wine, and as such is the very best persimmon on the market. Consumption is rising every year and consumer awareness is growing too; there can be no doubt that the promotional activities are facilitating this trend.

“Overall we had a good last season, with production slightly higher than the previous year. This was in spite of a challenging November, when persistent rain made harvesting difficult. We are expecting similar volumes this year, although this forecast may rise by as much as 10 per cent. Sizes will be slightly up also.”