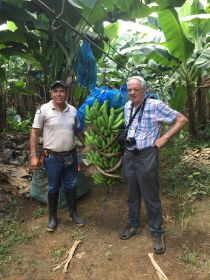 Long-term SH Pratt Group employee David Whitlock has been rewarded for 50 years service to the company with a trip to Costa Rica.

Whitlock, who is now aged 68, started with the company when it was based in Amersham and has moved to new locations as the business has grown. He now works for Pratts' logistics arm, Kinship Logistics, based in Luton.

To thank him for his longstanding career at the company, he was given a 10-day trip to Costa Rica to visit banana plantations, the furthest he has travelled outside of Europe.

Whitlock said: “I started with the SH Pratt Group when they were based at Kings Langley and was lucky enough to be taken with them when they expanded and moved to Hemel Hempstead in 1967, and once again 30 years later when they moved to where we are now in Luton.

“I have always been involved with the transport and logistics side of the business and it has been an honour and a pleasure to have spent my career with the SH Pratt Group.

“In this day and age there are not many people who are fortunate enough to be able to say they have spent their whole working life with one firm. I am fortunate that I have been able to make the moves with the company, but it is a brilliant firm to work for.

“Although it has grown and expanded since I started SH Pratt Group has remained a family firm and you are part of that working family. It has been very enjoyable working first for the company founder Bob Wells, and now for his son, Robert."

He was presented with the reward at an annual staff function where CEO Robert Wells also made a speech about his time at SH Pratt Group.

“Apart from the usual trips to Europe and work related to trip to Morocco, it is the furthest I have ever travelled and it is a great opportunity to travel with my colleagues who already know the area to learn all about the product I have spent  50 years of my life working with,” he said.

Managing director David Bateman: “50 years with a company is certainly and achievement and David is a valued member of our team.

“We all felt it was right that his dedication was rewarded and our chairman, Robert, was delighted to be able to speak so highly of David to the other employees.

“The trip to Costa Rica seemed like a fitting celebration to recognise David’s dedication to the group and I know he has spent the last few months looking forward to his trip.

“David has been a loyal and dedicated employee and we are proud to have him on our team.”