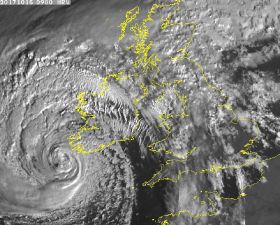 A satellite image of Hurrican Ophelia on 16 October

Growers in Ireland and Northern Ireland have moved picking schedules forward as Hurricane Ophelia is set to hit the island later this afternoon (16 October).

Produce businesses in Northern Ireland have begun picking early to ensure staff are able to leave early, with transport contingency plans in place for this afternoon.

Winds of up to 80mph an hour are expected to hit Northern Ireland and Republic of Ireland, with the Met Office warning of severe coastal flooding and flying debris.

Elaine Shaw of Northern Irish Producer Organisation Northway Mushrooms said: “Generally pickers have started early and they will be finished before lunch to ensure all staff get home safely.

“Their main concern is getting staff home safely. There have been early warnings about the storm from the government agencies so growers will have contingency plans in place for transport.”

Micro salad and specialist veg grower In Season Farm tweeted that the company is harvesting crops early today at its site in Drogheda, on the east coast of Ireland in County Louth.

A spokesperson for Northern Ireland’s Ulster Farmers Union said the weather has been bad “for months”. “Obviously we are concerned and people are preparing. But we’ve been dealing with the effect of bad weather for a while now,” the spokesperson said.

Patrick Farrell, of the Irish Farmers' Association, said most of the strong winds are forecast for along the west coast, while most horticulture businesses are in the east.

"However strong winds are forecast for most of the country so we would be afraid of structural damage to glasshouses, polytunnels and similar structures," he said. "For the next few hours it will be a case of batten down the hatches and hope for the best."

Met Office chief forecaster Steve Ramsdale said: “By the time Ophelia reaches our latitudes, she will be weakening and will be an ex-hurricane. However, Ex-Ophelia will be bringing some significant impacts to Northern Ireland and western and northern Britain on Monday and Tuesday.”

Elsewhere in the UK, Ophelia will help drive up temperatures to over 20 degrees in some areas at the start of the week.

“Temperatures across large parts of southern and eastern England will become increasingly warm over the weekend and are expected to exceed 20 °C on Monday, with isolated spots possibly reaching 24 °C,” Ramsdale added.