Amazon can 'treat whole food category as a loss leader' 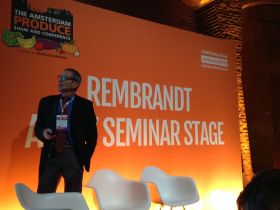 The Amazon-Whole Foods merger is a “juggernaut deal” that will transform the global food industry through low prices and intensified competition.

That was the message from Ed McLaughlin, a professor of marketing from Cornell University, who spoke last week at the Amsterdam Produce Show on disruption in the retail sector.

Due to its size, Amazon can “treat the whole category of food as a loss leader”, said McLaughlin, leading to intense competition on price among other grocery retailers.

“Immediately after the deal they started slashing prices. Whole Foods started rolling out select price cuts of between 30 and 50 per cent the day after the acquisition in stores across the US,” he said.

“When Whole Foods starts to lower its prices, major supermarkets will get nervous. There’s a real threat to the industry.”

McLaughlin said Amazon boss Jeff Bezos is “relentless on two strategic elements” – speed, and the lowest prices – and said one of the businessman’s mottos is ‘your margin is my opportunity’.

“He has also got a long history of selling at a loss to inflict pain on competitors, something he’s done in areas such as books or media,” he continued.

Speaking about he impact on the fresh produce industry, McLaughlin said companies will have to “profoundly cut costs to fund investment in growth” in the face of the new competition.

For retailers, radically simplifying supply chains will be the only way to compete, he said, adding this is more of an opportunity in the US rather than Europe, where much of the cost has already been stripped out.

Meanwhile, serving growing markets such as discounters and fast-growing symbol group chains, which McLaughlin said are moving away from a reputation for second-grade produce, will help suppliers diversify and succeed in the new retail environment.

In developing its supply chains in fresh food, McLaughlin said Amazon is likely to seek direct to grower relationships, but he said the online giant is not yet as sophisticated in fresh procurement as traditional retailers.

“Amazon is a bit naïve in food, they know how to buy TVs, cameras and books, but the perishability and fragmentation in the produce industry is something they’re not used to,” he said. “But they are smart people and they will learn. They have major plans in the fresh produce industry.”

McLaughlin said the three biggest disruptors to grocery retail are the expansion of Walmart, the growth of the discounters, and the entry of Amazon Fresh combined with the acquisition of Whole Foods.

“This is a continued evolution of competition in the food supply system, with the exception of Amazon-Whole Foods, which is something genuinely different,” he said.

The impact of Amazon’s acquisition of Whole Foods was felt within 24 hours, according to McLaughlin, as both companies’ share price immediately increased to more than the acquisition cost.