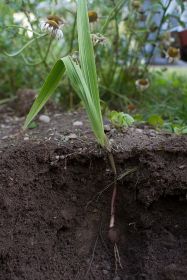 Cranfield University is the natural reference centre for soils

The university, which has won the award five times during its history, was recognised for its research and education in large-scale soil and environmental data for the sustainable use of natural resources in the UK and worldwide.

It was presented by the Royal Anniversary Trust at a reception at St James’s Palace in London.

Chief executive and vice chancellor of Cranfield Peter Gregson said: “We are honoured to be winners of the Queen’s Anniversary Prize for the fifth time. Soil science is an integral part of the University’s past, present and future.

“Information held at Cranfield continues to influence land management policy nationally and internationally. This award is a well-deserved acknowledgement of the work of current and former academic, technical and support staff.”

Cranfield has a long history in soil science – in England and Wales alone, the equivalent of over 200 years of fieldwork has identified over 750 different types of soil and has created the largest collection of soil information in Europe.

It has also been designated by the Defra as the national reference centre for soils.

Defra chief scientific advisor Professor Ian Boyd said: “Soils are an essential resource and I am delighted that their importance has been recognised through this prestigious award to Cranfield University. I congratulate Cranfield on their leadership in this important field.”

Leon Terry, Cranfield director of environment and agrifood, said: “We are delighted to be the first university to win an award for soil science. For more than 40 years, Cranfield has been ensuring that practical advice on land use is linked to the protection of soil assets in the national interest.”

The Queen’s Anniversary Prizes are awarded every two years to universities and colleges who show excellence, innovation, impact and benefit for the institution itself and for society in the wider world.