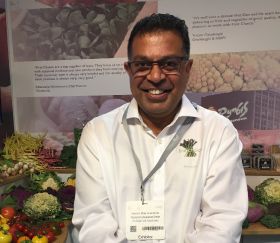 Vernon Mascarenhas at The Restaurant Show 2017 with First Choice Produce

Seasonality champion Vernon Mascarenhas has left one New Covent Garden Market wholesaler for another as he looks to foster closer links between chefs and growers and bring new products to the market.

The former head of sales and marketing at First Choice Produce has joined high-end catering supplier Nature’s Choice as commercial director, with the aim of improving chefs’ understanding of seasonality and the availability of British produce.

The company supplies some of London's most perestigious nightclubs, bars, hotels and nightclubs.

“I will have a lot more to do with the growing and sourcing side of things at Nature’s Choice,” Mascarenhas said. “My new position will allow me to develop my links with growers a lot closer, bringing producers and kitchens in greater touch.”

He added: “I want to allow chefs to get closer to the source of their product and to create better understanding among chefs about the British produce that’s out there.

“This is particularly important following Brexit because we now have to concentrate more on what is and can be grown in the UK. I want to see menus – particularly in January, February and March – that are not reliant on Spanish and other European produce.”

After four years at First Choice Produce, Mascarenhas said he felt it was time to move on, and one of his main reasons for joining Nature's Choice was the freedom he will be given to launch new products. The wholesaler revealed that he’ll be bringing several new products to market at Nature’s Choice in the coming months.

These will include a new range of baby leaf grown by microleaf specialist Westlands in the south of England; a recently-launched brand of chipping and roasting potato developed by French chef Pierre Koffmann and his wife Claire; and a new range of vegetable juices, including Jerusalem artichoke, cavolo nero and sweet potato, for use in cocktails and other drinks.