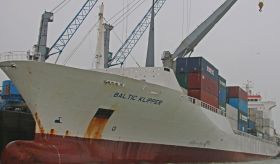 The Baltic Kipper was the first Geest Line arrival into Dover

Fresh produce shipper Geest Line has welcomed its first arrival into the Port of Dover with a consignment of fruit from Colombia and Dominican Republic.

The 14,000-tonne Baltic Klipper was the first of a newly-strengthened fleet of five Geest Line ships to arrive at Dover, following a relocation from Portsmouth. The move was prompted by the need for a revised rotation schedule and more shipping capacity, Geest Line said.

The company will initially operate from Dover’s eastern docks cargo terminal before moving to new state-of-the-art facilities at the western docks in 2019.

Managing director of Geest Line, Captain Peter Dixon, said: “The arrival of our first vessel is truly the start of a new era of imports and exports for UK and European trade through Dover.

“As well as being able to handle our requirements immediately, Dover offers the prospect of further growth through its exciting port development on the western docks. This potential makes Dover an ideal partner for Geest Line operations.”

“The welcome we have had has been extremely positive and we look forward to being an active member of the port community here.”

“We’re delighted that the Port of Dover is their choice for cargo operations in the south of England. We look forward to a long, positive relationship with Geest Line as we grow our cargo facilities with Dover Western Docks Revival."

The move to Dover comes as Geest Line replaces its fleet of four charter vessels with five larger and newer ships, increasing container and breakbulk capacity by over 40 per cent."

As well as the Baltic Klipper, the new vessels, which are all chartered from Seatrade, are the Lombok Strait, Luzon Strait, Atlantic Klipper and Royal Klipper.

Two port calls in Colombia have been added for fruit while a new stop at Flushing in The Netherlands will help with northern European freight handling, the company said.