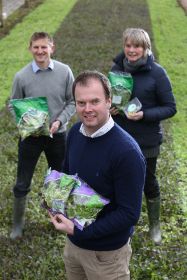 Philip Dodd has taken over as managing director of Herbs Unlimited from his mother and business founder Alison Dodd.

The Yorkshire grower was founded by Alison Dodd, who will continue in a part-time business development role, in 1992. The company supplies the catering, hospitality, food manufacturing and wholesale sectors with herbs, salads and edible flowers grown on its farm at Sandhutton, near Thirsk.

Philip Dodd, who previously held the position of operations director, said: “This is an exciting moment and a new chapter for the business. Mum has left some big footsteps to fill but I am delighted to have this opportunity to make my own mark on the company after working alongside her for so long.

“Horticulture is a fast-moving and competitive sector and, with the management appointments we have made over the last year, we are ideally positioned to build on our successes and rise to the challenges presented by Brexit.”

After graduating in land and farm management from Harper Adams, Philip Dodd worked with East Kent-based grower Intercrop for three years before joining Herbs Unlimited in 2007 in a production management role.

Promoted to the board in 2011, he has been responsible for the day-to-day activities in the packhouse and on the farm since 2012, with his mother focused on marketing and sales. Together they developed Herbs Unlimited into a £4 million turnover business and the farm has expanded from 30 to 120 acres, employing 49 permanent staff.

Phillip Dodd said: “Our key point of difference remains our speciality herbs and edible flowers. The ever-growing demand for UK produce means that we grow as much as we can here in North Yorkshire, however during the winter months we import from carefully selected overseas partners.

"Investment in further infrastructure will help us to counter higher exchange rates and resulting higher import costs. Continuous innovation remains key to our success and we are currently trialling LED lighting and hydroponics to extend our growing season, along with the expansion of our polytunnels.

“The majority of our produce is hand-picked and packed and following on from the success of our current apprenticeship scheme we hope to extend it further; there are great opportunities in both sides of the business.”

In 2016 Herbs Unlimited invested £200,000 in new machinery to increase the output of its packhouse. This has enabled it to optimise opportunities for growth in wholesale markets and through the increasing nationwide popularity of food boxes, according to the company. It also invested in a second wave of solar panels.