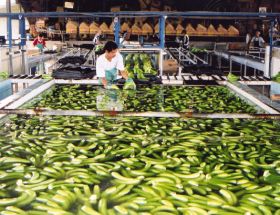 Banana supply to the UK and Europe is the tightest it’s been for many years, according to suppliers, following bad weather and vessel delays from Central America.

Low temperatures, heavy rains and flooding have significantly reduced yields in Costa Rica and other Central American sources, with importers expecting the squeeze on volumes to last for at least the next four weeks.

The bad weather in Costa Rica, a major source of bananas to the UK, is also likely to result in skin marking and growth problems, according to a major importer.

And to make matters worse, the country has been affected by persistent shipping delays, caused by a combination of the weather conditions and heavy congestion at Puerto Limon.

The east-facing port, from where containers are sent to the UK, has been operating above capacity for some time, according to importers, causing regular delays to banana shipments.

Volumes from Colombia, another major UK source, have also been short, following a ‘civic strike’ last summer that shut down the port city of Buenaventura for several weeks.

This has also had a knock-on effect on shipments from other South American origins that tranship via the port.

“The situation is quite tight at the moment in terms of fruit availability,” said one major UK banana supplier. “There’s been a lot of bad weather, and there have been supply problems from various sources in Central America, particularly Costa Rica. This, combined with vessel delays, has hit the market hard.”

“The first few weeks of 2018 have been the hardest it’s been for a long time.”

One of the few countries to escape the low temperatures and adverse weather that has affected Central and northern South America has been Ecuador. Consequently, the country is experiencing particularly high demand for bananas, putting strain on supply and pushing up spot market prices.

“Ecuador very important for banana suppliers at the moment, particularly the big multinationals, due to the tight supply in other countries,” said one UK banana supplier.

“Companies are spot buying in Ecuador to make up for shortages in Costa Rica and Colombia. And although this is not uncommon, and prices are always high from February until May, this year supply is particularly limited.”

In Hungary, a country with only the 58th largest GDP in the world, the wholesale price of a box of bananas has reached £22.