New Zealand-based group sees revenues surpass NZ$1bn in its 120th year, but profits drop by more than 30 per cent 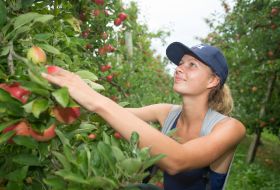 T&G Global has reflected on “a challenging” 120th anniversary year in its full-year results for 2017, with net profits falling by 36 per cent to NZ$22.6m.

The group’s revenue surpassed NZ$1bn for the first time, increasing by almost 27 per cent, with T&G citing growth in its core business as well as a contribution from its first-time consolidation of UK subsidiary Worldwide Fruit.

The majority of the increase was attributed to the consolidation of Worldwide Fruit. The UK subsidiary was included in T&G’s results for the first time following the renegotiation of the shareholders’ agreement between Worldwide Fruit’s two 50 per cent shareholders.

The growing maturity of T&G’s international operations and inflationary increases in employee wages and salaries also added to an increase in operating costs, the company said.

“In the pipfruit division, significant unseasonal rain in Hastings, New Zealand, in the early part of 2017 impacted on apple quality and harvests, reducing the amount of quality fruit available for local and international markets,” said chief financial officer Wolfgang Loose in his introduction to the the 2017 Financial Statement.

During the year, T&G acquired a 39.4 per cent shareholding of US company Grandview Brokerage, which holds 100 per cent of David Oppenheimer & Co. T&G has a long association with Oppenheimer, and the move came as T&G seeks to boost its position in the US market with its own grown and sourced pipfruit. One-off gains of NZ$23.6m relating to the acquisition of shares in Grandview and the consolidation of Worldwide Fruit were largely offset by asset impairments in the business, the company said.

T&G also continued to invest in its New Zealand infrastructure and growing operations during 2017 with a capital investment programme worth NZ$20.4m. This helped to fund the planting of 62ha of new apple orchards and 140,000 new apple trees to support the supply of key varieties for T&G’s export programmes.

2017 concluded with the resignation of T&G’s then-CEO Alastair Hulbert, who departed abruptly on 15 December after five years in charge. Thomas Bargetzi, who has worked with majority shareholder BayWa for ten years, continues to serve as acting CEO while the group conducts “a global search” for his successor.

Despite the challenging year for T&G, Loose said the overall business remained on track to achieve its “long-term strategic objectives”.

“These include further vertical integration, additional investment in plant variety rights, product marketing, and a continued focus on customer value and investment in people,” he noted.