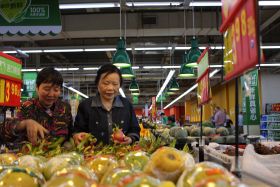 Chinese consumers are primarily put off by the high prices of imported food, says data conducted by UnicView Market Research and Consulting.

The report, commissioned by the Agricultural Trade Office (ATO) in Shanghai, explores nine categories of imported food products, including fruit, and how they are perceived by consumers in Shanghai, Nanjing, Ningbo and Wuhan.

According to the surveyed consumer group, imported fruit was the product with the largest perceived market share out of the nine products.

41 per cent of consumers chose these imported products for their favourable taste and flavour. 34 per cent also listed the second most common reason as being ‘natural and safe’.

The key reason for not choosing imported products over local was due to high prices, which 45 per cent of respondents listed as their top purchase barrier. The second most cited issue was availability of local substitutes.

A landslide of consumers said they source information on imported products through the internet, however, physical purchasing was primarily done through both online and offline channels. Hypermarkets and speciality stores were favoured offline, and Tmall, JD.com and Taobao for online shopping.

In the tree nut category, the US outperformed in consumer preferences, but they considered Oceania and the EU to have the best reputation for being natural and safe, as well as products with good taste and flavour.

The report identified some imported “food pioneers” who make an annual expenditure of over US$1,500 on imported products, which made up 39 per cent of the categories’ value. The average expenditure of surveyed consumers was around US$750 per year.