British asparagus on track despite delays 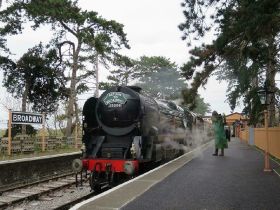 The British asparagus season steamed ahead today, as a vintage train delivering the first Vale of Evesham spears departed on time, despite delays to the season.

Organised by the British Asparagus Festival, the “Asparagus Express” left Broadway, Worcestershire, and finished at Cheltenham, with celebrations at either end.

Traditionally, 23 April marks the beginning of British asparagus, with the festival founded in 2006, sparking events across the country promoting the popular vegetable.

Asparagus from the Vale of Evesham was given a boost in December 2016 after gaining protected status by the EU.

Borough Market is also hosting guest traders during the festival, which runs into June, to talk about the asparagus growing season, which has been delayed this year after a particularly cold winter.

“This warm weather has had a dramatic impact on heat accumulation, I think it’s been one of the warmest since 1948, so we’re right back at the five-year average but we’re still a bit behind.”