Watercress season kicks off with a cart

One of Britain's largest watercress suppliers, The Watercress Company, delivered their first batch to Tesco in traditional style 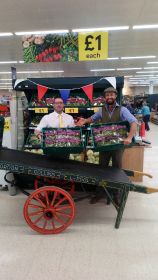 The British watercress season began this week with suppliers The Watercress Company delivering their first batch to Tesco on a Victorian barrow.

All lie in the heartland of the UK watercress industry which straddles Dorset and Hampshire and helps explain watercress’ popularity in these areas.

Watercress, which only grows outdoors along the Dorset chalk belts, sells better in those regions than in other parts of the country.

Harper used a traditional wooden barrow that would have been a common sight as watercress was trundled around fresh produce markets in the 1800s.

Jon Roberts, manager of the Tesco Winchester Extra said: “Our customers clearly love that they can buy fresh, British watercress grown locally from our stores.

“This is reflected by the far higher sales of watercress from these five stores than from most other Tesco outlets nationwide.  To have the season’s first crop, freshly harvested this morning, delivered by the growers directly to our shelves was a great way to thank our customers for their loyalty and support; and while stocks last we will be selling 85g bags of watercress for £1 only.”

“Watercress has been, and remains, an important produce for the area and locals obviously feel great loyalty towards it as well as appreciating its taste and health properties.

“Demand is growing for watercress nationwide, however, and whereas we used to have a clear delineation between UK and Spanish supply this line is becoming more blurred as UK beds can’t keep up with demand.

“I would urge consumers not to throw back the Spanish labelled watercress in horror and instead be reassured that Spanish grown watercress is still farmed by us, a British company and remains as beneficial to the economy as that grown in Hampshire and Dorset.”