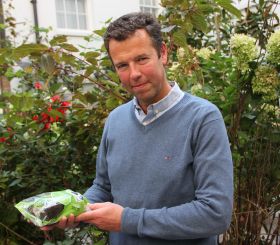 Graham Isaac is optimistic about the avocado brand's prospects

Westfalia Fruit has begun a social media marketing drive on its gourmet avocado brand Gem as the product enters its second season at Tesco.

Working with fresh produce marketer Coregeo – which also commercialises the Pink Lady, Tenderstem, Bimi and Metis brands – the avocado supplier has joined forces with social media ‘influencers’ to promote the product and encourage consumers to prepare the product in inventive ways.

This approach is being complimented by adverts on social media and the Tesco website, however the multinational said it had decided not to invest in other, more traditional forms of marketing, such as print advertising, for the time being.

“For now we want to focus on social media advertising alone and see how it goes so we can match volume to demand as the product gains in popularity,” said Graham Isaac, who is head of retail at Westfalia’s UK arm, Greencell.

Speaking at a promotional lunch attended by social media influencers and journalists, he added: “We want people to post about the product on Instagram, Twitter and Facebook – people that are passionate about the product. I think this is the right way to develop our brand.”

With a retail price of £3 for a twin-pack of two ‘extra-large’ avocados, Coregeo is mainly targeting empty nesters and millennials in the AB1 demographic, with advertising and recipe ideas designed to appeal to these groups.

Isaac said Westfalia expects to sell 40,000­ to 50,000 cases of Gem avocados at Tesco this season, serving 549 stores across the UK. This is a marked increase on last year when the new brand was sold at just 200 of the retailer’s outlets.

Currently, the Gem variety is grown in South Africa from September to the end of November and thereafter in Israel. Going forward, Isaac said Westfalia would look to expand production to other countries where it has plantations to allow for year-round supply. These include Peru, Colombia, Chile and Portugal.

“Ultimately, we want Gem to be as successful as the top brands in fresh produce,” he said, “and in time I’d like to see it sold in other European markets beyond the UK. But we have to develop it in the right way, to the benefit of our growers and the company.”

More generally, Isaac said he was confident that UK and global demand for avocados would continue to grow, citing opportunities to increase household penetration.

In Britain, penetration has increased from around 20 per cent five years ago to 33 per cent today and Isaac believes there is plenty more scope for expansion given that in the US more than half of households buy avocados.

Huge opportunities also lie in China and India, with both markets yet to be properly explored by avocado exporters despite encouraging progress from suppliers in Peru and Chile.