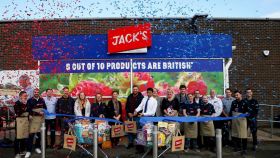 The new discounter said it would fund community projects in the new store locations using money raised through the sale of carrier bags. Soon Jack’s will be inviting charities and other groups to apply to be part of the next round of the scheme.

Once applications are submitted, they will be reviewed by Jack’s colleagues who will create a shortlist of four good causes for each store. Each will receive a donation of £250.

Voting will then begin in store, with the winner receiving carrier bag proceeds from their local store for a three-month period. This will be a guaranteed minimum of £500. Interested groups can find out more at jacks-uk.com/jacks-supports.

As in Tesco, the new Jack’s stores will also take part in Tesco’s Community Food Connection scheme. Working with UK food redistribution charity FareShare, it will ensure that any unsold food that is safe for human consumption is offered to local charities and community groups for free at the end of the day.

Jack’s area manager for Rubery, Tony Sinkinson, said: “It’s fantastic to open the new store and welcome customers in Rubery. I’m delighted that as well as offering great tasting food at the lowest possible prices, the store will also be giving back to our community through the Jack’s Supports scheme.”

The area Manager for Middlewich, Kate Forth, added: “Following successful openings in Merseyside it was great to open the store in Middlewich. The hard work of colleagues has made this possible and we’re really excited to start serving customers.”

The launch of Jack’s is part of Tesco’s centenary celebrations.