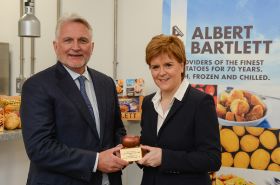 Albert Bartlett, the UK’s leading supplier of fresh potatoes, welcomed the First Minister of Scotland Nicola Sturgeon to its headquarters in Airdrie on Monday 26 November, where she unveiled a plaque to open formally the new chilled potato plant.

The manufacturing facility is already in operation, producing branded and retailer own label products. It will process 50,000 tonnes of potatoes a year, around 90 per cent of which will be grown in Scotland.

Speaking at the official opening, Sturgeon said:“The new manufacturing facility has enabled the company to develop new products, attract new business and is a huge boost to both our food processing and horticultural sectors. It has also led to the creation of 35 new jobs.

“The Scottish government has invested more than £4 million in Albert Bartlett’s new £17.7m potato processing facility. Since 2014 our food processing grant scheme has assisted almost 100 projects, providing a grant of around £42m and leveraging £134m of private sector investment.

“Projects supported by the scheme have created around 1,000 jobs and helped safeguard a further 5,000.”

Earlier this year, the Scottish government awarded Albert Bartlett a Food Processing, Marketing and Co-operation grant of £4m. The award contributed to the total investment in the new factory and development kitchen, which will allow the company to introduce new chilled potato products.

Supported also by investment from HSBC, the move represents a major development for the potato producer, which processes almost a fifth of the fresh potatoes sold in the UK and has operations across the UK and internationally.

The company’s development has created 35 new jobs and safeguarded 50 more in Airdrie, as well as providing security for its partners working in the entire supply chain, not least its dedicated group of potato growers.

Albert Bartlett said its strategic vision was “to become the world leader in potato processing through its commitment to quality, innovation and customer satisfaction, delivered in an environmentally responsible way”.

Having already established itself in the preparation and distribution of fresh potato products, the company moved into the frozen potato market in 2015 with its plant in Norfolk and has now taken the opportunity to continue this diversification with a move into the chilled arena.