Ferry space could be "rationed" for no-deal Brexit 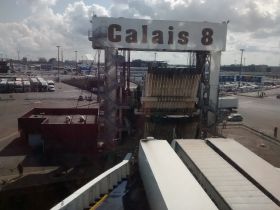 The government is mulling plans to ration space on ferries to transport key supplies like food and medicine in the event of a no-deal Brexit.

Theresa May held two meetings last week to plan for severe disruption to the Dover-Calais ferry route in the event of a no-deal Brexit according to the Financial Times.

The paper reported that transport secretary Chris Grayling warned the cabinet of cross-channel trade between the two ports being cut by up to 87 per cent if Britain crashes out of Europe. With almost 90 per cent of Britain's fruit imported, fresh produce would be badly hit by any blockages to the route.

Whitehall officials have estimated any disruption to the route could take six months to resolve.

Grayling has allegedly written to colleagues seeking approval for the chartering of ships and ship space to carry vital supplies from France, and avoid tailbacks at Calais and Dover.

One government official told the FT: “Perishable goods like salads and vegetables won’t make it on to ‘DfT Seaways’. Some foods will run out in the supermarkets — it will be a bit like the USSR.”

The Freight Transport Association has repeatedly stated that a no-deal Brexit is “not an option” for transport, with lorries also facing a heavy restriction on numbers due to a lack of permits required to carry goods.

In response the government said they would be operating a weighted permit allocation scheme, with food and medicines taking priority. A lottery would be held to allocate remaining permits to other goods, described as by one government official as "gearboxes versus pâté".

Parliament will vote on December 11 whether to accept Theresa May’s proposed Withdrawal Agreement, which keeps Britain in a customs union with the EU, much to the chagrin of many pro-Brexit politicians such as Jacob Rees-Mogg who said it was a "rotten deal".