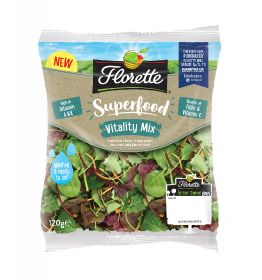 Florette has partnered with Diabetes UK to launch a new superfood salad at Tesco and Waitrose aimed at combatting the condition and promoting healthier diets.

Three pence from each Superfood Vitality Mix sold by the bagged salad brand will be donated to the charity, which supports and advises consumers on how to prevent or delay Type 2 diabetes by maintaining a healthy weight, eating well and being active.

Containing a combination of mild leaves, Florette said the new salad is aimed at shoppers looking to improve their general health and wellbeing.

High in vitamins A and K, and a good source of fibre and calcium, the Superfood Vitality Mix includes baby spinach, ruby chard, kale and carrot. It can be eaten as a healthy lunch or an accompaniment to a main meal.

Rebecca Walker, brand manager at Florette, said: “As we head into 2019, healthy eating will continue to be the number one consumer trend. We’ve seen a consistently high demand for our original Superfood Salad since it launched three years ago and we believe the new Vitality Mix, which is part of the Superfood range, will provide a further option to those consumers seeking a healthy alternative at meal times.”

Commenting on the partnership with Diabetes UK, she added: “There are 12.3 million people in the UK at risk of developing Type 2 diabetes – and it is estimated three in five of these could be prevented or delayed by adopting a healthier lifestyle – so it made sense to support a cause that is dedicated to educating consumers on the benefits of embracing and maintaining a healthy eating regime.

“We hope the money generated from the sales of Vitality Mix will help support the vital services this charity provides.”

People are more likely to get Type 2 diabetes if they are overweight, and it can be prevented or delayed in the majority of cases by adopting a healthy diet and taking regular exercise.

There are now nearly 3.7m people with diabetes in the UK, almost 90 per cent of whom have Type 2 diabetes.

It is estimated that there are nearly one million people currently living with the condition who don’t know they have it because they haven’t been diagnosed. Additionally, 12.3m people in the UK are at risk of developing Type 2 diabetes.

Will Macleod, head of philanthropy and partnerships at Diabetes UK, said: “With millions of people affected by Type 2 diabetes we need to shape an environment that reduces obesity by providing healthy choices.

“We know that Type 2 diabetes can be managed better and the risk of developing the condition can be reduced if people adopt a healthy diet and eat more of certain foods including vegetables.

“Thanks to this important partnership, we have the opportunity to raise awareness and much-needed funds to promote healthier eating.”

Florette’s new 120g Superfood Vitality Mix will be sold at an RSP of £1.50 and will be available in Waitrose and Tesco from January 2019.