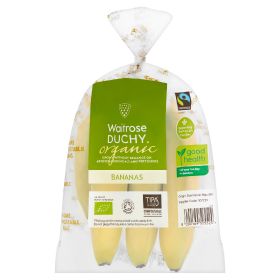 Waitrose has become the latest supermarket to make a plastic-reduction move for its banana range.

The move to the bag, made with non-GM corn, will save an estimated 18 tonnes of plastic per year. The bag can be home composted, or reused first as a food caddy liner at home before being home composted.

Waitrose's Tor Harris said: "We’re excited that Waitrose Duchy Organic bananas are the first of our fresh produce to be packaged in our groundbreaking home compostable bag. This move shows the continued efforts we’re making to reduce unnecessary plastic packaging wherever we possibly can and is part of our pledge to make all packaging either widely recyclable, reusable or home compostable by 2023."

Waitrose removed plastic bags for its Duchy Organic bananas last year, replacing them with a plastic band while trials took place on the compostable bag. The bag not only protects and maintains the quality of the bananas, it also removes the need for plastic banana box liners, the retailer explained.

Waitrose also revealed that it is currently trialling a home compostable fruit and vegetable bag for loose produce, which it plans to roll out to all branches in spring this year.