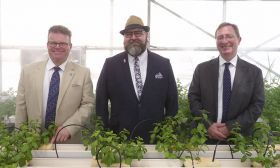 The first greenhouse, which was launched at the University of Sohar in Oman on 13 March, has been developed as part of a collaboration between the two institutions.