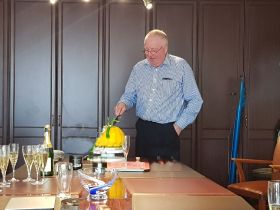 Director of Moulton Bulb Company David Hodgson has retired after a long spell in the British onion sector.

Hodgson, now 72 years old, started his career in fresh produce when he was just 19, as a trainee potato salesman with John A Graves in Kirton, Lincolnshire.

In 1968 he moved to growers cooperative Elgro as a junior salesman and by 1997 he had become a director and chairman of its onion business.

Sadly, in 1999 the co-op lost most of its business through supermarket rationalisation and the onion processing division was bought by Moulton Bulb Company. Hodgson moved across with many of his team to Moulton and says it was the best thing that ever happened to him.

He was subsequently appointed to MBC’s board and has been a valuable member of that team for the past 19 years.

According to the company, Hogson has made many notable achievements during his career. He was largely responsible for Elgro being the first British company to export substantial quantities of onions (to Germany, Sweden and St Lucia) against tough competition from the Dutch.

A former chairman of the British Onion Producers Association, Hodgson also played a crucial role in the export of 1,000 tonnes to German supermarket chain Edeka in just a 10-day period. He believes this was a first time this quantity of onions has been exported from the UK in such a short space of time.