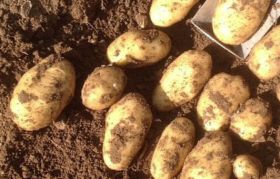 Groups such as GM Freeze, Organic Research Centre and the Soil Association, are fighting the trial proposal, which they say could risk off-target effects and unintended impacts, such as the accidental spread of the GM crop or accidental consumption by animals of humans.

The potatoes that The Sainsbury Laboratory (unconnected to Sainsbury’s supermarket) hope to plant contain several different genes that work in different ways to control different biological functions. But those protesting the trial say the trial is not consider the possible interactions between such stacked traits.

GM Freeze director Liz O’Neill says: “When a patient is prescribed more than one medication, their doctor and pharmacist consider the potential for interactions on a case by case basis. Here, a bunch of unrelated genes are being added to a staple food crop and assessed for safety on a simple ‘face value’ basis.”

Critics are urging Defra secretary Michael Gove to refuse permission for the trial, which also uses gene-silencing techniques to “switch off” the function of certain genes, after the laboratory submitted the application at the end of March.

O’Neill adds: “The Sainsbury Lab propose monitoring the trial site for two years after harvesting the modified potatoes but anyone who has grown their own knows that potatoes can lie dormant in the soil for many years, popping up as a vigorous new plant just when you least expect it.”

·     The GM plants have not been fully characterised,

·     The GM plants are modified in complex and novel ways that have not been adequately assessed,

·     The containment and monitoring measures are not adequate

·     The proposed trial will be of no net benefit to society

The letter stated: “The GM potato field trial should be refused on the grounds that the environmental risk assessment is incomplete and, importantly, cannot be completed at the current time because of the acknowledged gaps in scientific understanding regarding potential effects on non-target organisms.”

While not illegal in Europe, GM crops face heavy regulation considerable barriers to market entry, which make them all but impossible for agri-breeders to market.

Hopes for gene-editing methods, which are seen as a less intrusive way of altering plant genes, were dashed last year when the European Court of Justice ruled that it should be considered as any other GM crop method.