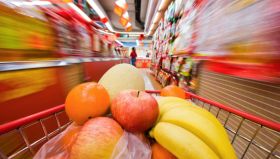 Retailers need to harness social media and secure their position on the high street by bridging the gap between in-store and online experiences as shoppers’ buying habits change.

That is the message from new shopping app Ubamarket, which allows users to enter a shopping list and have it rearranged into the order the items are displayed in the store.

With shoppers increasingly looking for convenience, and with the UK set to become the second largest online grocery market worldwide after China by 2020, the tech company stressed that retailers need to adapt to the demands of shoppers to avoid a continued downturn in bricks-and-mortar sales at some chains.

Volume and value sales across the UK’s physical food stores fell by 0.5 and 0.2 per cent respectively in February, however it should not be forgotten that Tesco, Morrisons, Aldi and Lidl all enjoyed bumper sales over the Christmas period.

Nevertheless, Ubamarket says that in order for supermarket chains’ bricks-and-mortar stores to remain relevant, they need to create “hyper-personalised experiences” and make shopping in-store for specific ingredients as simple as possible.

Research by the company found that six million British home cooks manage their weekly shop based on the recipes they want to try, rather than buying the same ingredients every week.

Meanwhile, around five million Brits (17 per cent of consumers) are more daily recipe-based shoppers than weekly food shoppers, with 13 per cent of home cooks saying social media has revolutionised how they cook and made them more explorative chefs.

The company claims that many shoppers are sticking to prepared shopping lists that incorporate recipes they see on different social media platforms and want to emulate.

Measures that stores can take to make shoppers’ experience easier include adapting store layouts to make it quicker and easier to locate specific ingredients.

“Supermarkets need to galvanise these new trends as end-of-aisle promotions are no longer an effective in-store marketing tactics,” the tech firm said.

Chief executive and founder of Ubamarket Will Broome added: "By eliminating frustration for consumers who are seeking new ingredients presented by their favourite celebrity chefs online, supermarket retailers will enrich the shopping experience and will be able to broaden their in-store offering.

“I am looking forward to seeing the British appetite change, diversify and widen as supermarkets widen the variety on their shelves for adventurous chefs.”