Lord Mayor Peter Estlin said consultations would continue, with all three markets on one site the "desirable outcome" 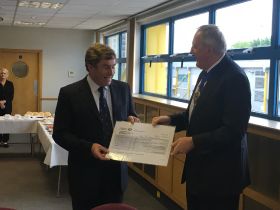 The vice chairman of the Spitalfields traders’ association said the proposed market move was “very exciting”, despite concerns about location, at the annual Lord Mayor’s visit.

Current Lord Mayor of the City of London, Peter Estlin, toured the Leyton site with a delegation of fresh produce industry figures, visiting traders who sell over 750,000 tonnes of fresh fruit, vegetables and flowers each year.

Following the tour at breakfast, the vice chairman of Spitalfields Market Tenants’ Association, Chris Hutchinson, presented a £500 cheque to the Lord Mayor’s Appeal, received by Estlin, who said “charities are the core part of our support”.

This year’s visit fell shortly after the City of London Corporation announced plans to move the three City-owned wholesale markets, Spitalfields, Smithfield and Billingsgate to a new single site in Dagenham, East London.

Addressing visitors, Hutchinson said: “It’s a great honour to have the Lord Mayor come to our market, which we are fiercely proud of. It’s been fantastically successful since the move in 1991. Not once in that 28 year period has there been one empty space. The growth has been amazing; it’s worked incredibly well.”

Hutchinson said plans for the composite market are a “fantastic idea” adding “the Corporation couldn’t be in a better position to achieve this,” although warned of location concerns.

“We [tenants] are lobbyists for the for the best deal we can get, location being very important.

Estlin said: “The consultations are going on. The view of the City is that we need to continue to look at what we are doing. Bringing the markets together is a desirable outcome.

“I hope what we achieve takes us forward. There’s competition all around, and looking at how we deliver high quality produce in a practical way, that allows people to make money and a livelihood is really important.”