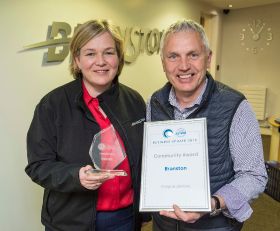 Branston's Sharon Affleck and David Nelson show off the award

Potato supplier Branston has been recognised by Tesco for an eco-friendly community initiative at a centenary event for the retailer in London.

At the IGD Tesco Business Update on 8 May, Branston was presented with the Community Award, rewarding its work with the Tesco Sustainable Farming Group.

The scheme encourages producers to grow cover crops over the winter in preparation for planting potatoes in the spring, giving them the opportunity to purchase up to 20 hectares worth of seed, subsidised by Tesco and Branston.

The supplier’s managing director James Truscott said: “We are pleased to have received the community award, as we have worked closely with our growers to encourage greater use of crop covers and we are constantly measuring the benefits.

“We have had growers across the country through Cornwall to East Anglia and Scotland involved in the scheme.”

Tesco created the programme as part of its responsible sourcing strategy, which also includes reducing greenhouse gas emissions from agriculture by seven per cent and improving water and biodiversity impacts in key agricultural regions.

The crop cover is recommended to be drilled between August and early September, prior to the potato crop being planted in spring.

Branston will be working with its growers to understand the carbon savings using its so-called Cool Farm Tool, and it plans to double the area of cover crops grown through the scheme this autumn.