Vittorio has garnered significant interest in Northern Europe thanks to agronomic characteristics, according to breeder Global Plant Genetics 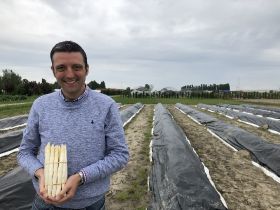 Global Plant Genetics’ first white asparagus variety Vittorio is in full harvest at a number of important growers in Northern Europe, the UK breeder has announced.

Since its launch in the autumn of 2018, Vittorio has attracted “a great deal of attention”, according to GPG, due to its “impressive agronomic characteristics”. Its early harvest, spear size, tip closure and uniformity all make it stand out from standard hybrids in the asparagus range, the company said.

“We have recently carried out study tours to a range of European sites growing Vittorio white asparagus,” reported co-owner and director of the firm Jamie Petchell. “We’re really excited to see that trials’ level performance is being replicated in commercial settings.

“One bonus factor about the variety is its excellent texture and flavour. Vittorio contains very low levels of fibre in its spears compared to traditional varieties. As a result, we are seeing it chosen first in blind tastings based purely on its improved eating quality."