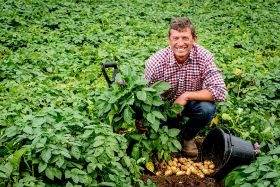 Cornish new potatoes have launched into Tesco stores this week, in what many regard as a signal of the start of summer.

The Branston-supplied potatoes, which represent the UK's first mainland new potato crop of the year, will be available in Tesco stores in 750g packs and as a loose option both online and in store until early August.

Their appeareance in stores is being backed by a consumer initiative known as Seasonal Spuds. Branston has set up a dedicated website and social media channels hosting recipes for seasonal new potatoes, together with competitions and information about the product.

“We know consumers love the fact that these potatoes are freshly harvested and brought to store in the shortest amount of time possible. That sweet fresh taste is one of the main reasons UK consumers love seasonal potatoes," said Sharon Affleck, sales and marketing director at Branston.

“As soon as the potatoes reach the right size they are harvested and packed as quickly as possible at our site in the south west. Harvesting just after the plants have flowered, while the skins are still thin and fluffy gives that traditional new potato texture and a mild, slightly sweet flavour. We know that customers are also attracted to their convenience and versatility. There is no need to peel them, so they are very quick and easy to prepare.

“To bring the freshest and tastiest potatoes to Tesco shoppers, we work very closely with our Cornish farmers – many of whom are third, fourth or even fifth generation growers – to ensure that the new potato crop is ready at the optimum time.”

Phil Rogers and his family, from West Cornwall, have been working with Branston for more than 25 years growing Cornish new potatoes from St Buryan to Newquay. The family have farmed at Pengelly Barton near Breage since 1967.

“Some of our earliest crops are grown in the rich, fertile fields overlooking the sea," said Rogers. "The milder sea air helps to keep frost at bay and enables the crops to get a really early start.

“As they’re growing we use natural seaweed extract to feed the plants and we monitor them really closely so that we can start harvesting as soon as they’re ready."