Nim's Fruit Crisps ties up with Save the Children in fundraising drive, with new flavour launched for the occasion 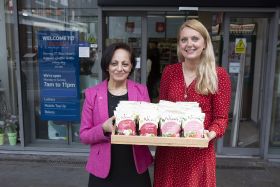 Nim's Fruit Crisps has launched a watermelon variety and teamed up with Save the Children in celebration of the charity's centenary year.

Nim's, which claims to be the UK's only manufacturer of air-dried fruit and vegetable crisps, will be donating 5p from every pack of apple crisps to the charity during a series of promotional periods throughout the year.

The manufacturer is also launching a special watermlon variety in red packaging to boost the fundraising drive further. They will be sold in hundreds of Tesco stores and independent retailers, with 5p per pack again going to the charity.

Nimisha Raja, founder of Nim’s Fruit Crisps, said: “The reason we launched the business was to provide children with a great-tasting alternative to mainstream crisps, so making young people healthier and able to enjoy the best possible life has always been a priority.

“We are continually looking to forge partnerships with organisations that have a similar ethos and we are delighted that Save the Children have agreed to put their name on our packs, recognising the fact we are giving children ‘one of their five a day’.”

Gemma Sherrington, executive director of fundraising and marketing at Save the Children UK, said: “Save the Children has been standing alongside children for 100 years, fighting for their rights to ensure they can live to see a better future.

“We are so excited about our new partnership with Nim’s as we know how important it is to give children a healthy start and the funds raised from the packets sold will enable us to carry out our vital work, reaching children across the globe. We are so grateful to Nim’s and its customers.”