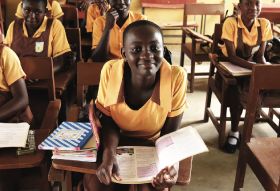 Fresh-cut tropical fruit supplier Blue Skies is celebrating the 10th anniversary of its charitable foundation, releasing a report detailing some of the achievements of its projects in Africa.

A collaboration between Blue Skies, Waitrose & Partners and Dutch retailer Albert Heijn, the Blue Skies Foundation was founded in 2009. Since then it has implemented over 100 projects, which it says have benefited over 100,000 people in Ghana, Egypt, South Africa and Senegal.

To celebrate the anniversary, the Foundation has launched a 10-year impact report and a short film, both of which are entitled: '10 Years Transforming Lives'.

Blue Skies chairman and founder, Anthony Pile, said: “It’s phenomenal what we have achieved in ten years, however we see this as part of our responsibility as members of the local community.

“Our unique cooperation with Waitrose & Partners and Albert Heijn helps us to focus on making sure the projects we fund are worthwhile, that they are carefully costed, and will serve our communities for a long time.”

The Foundation, which seeks to support the communities that participate in the production of Blue Skies’ fresh-cut fruit products, recently inaugurated a new project in Ghana: a three-classroom block for Nsumia Junior High School, located near the Blue Skies factory, north of the capital city Accra.