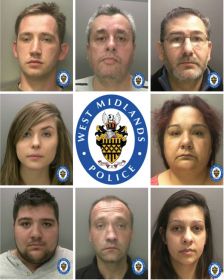 A giant human trafficking network has been exposed that helped supply fresh produce to some of Britain’s biggest supermarkets.

The Polish gang, which operated the biggest modern-day slavery network ever exposed in the UK, is thought to have trafficked up to 400 people to the West Midlands, forcing them to work for as little as 50p an hour and live in squalid conditions.

Some of the victims are reported to have picked and packed spring onions for a farm in Worcestershire that is part of a fresh produce supply group with customers including Waitrose, Marks & Spencer, Sainsbury’s, Tesco and Asda.

The organisers of the gang, five men and three women, have been jailed for more than 55 years in total, having lured vulnerable people from Poland with the promise of employment, money and accommodation.

The workers, who included homeless people, ex-prisoners and alcoholics, were made to work long hours on farms, rubbish recycling centres and turkey gutting factories for as little as £20 a week.

They were housed in vermin-infested properties on the outskirts of Birmingham, often crammed four to a room, fed out-of-date food and forced to find dumped mattresses to sleep on.

At some properties there were no working toilets, heating, furniture or hot water, and some victims said they were forced to wash in canal water.

Bank accounts were opened in victims’ names, using bogus addresses, but were controlled by the gang masters who were paying their workforce just £20 to £100 a week.

The victims, who ranged in age from 17 to a man in his 60s, were often receiving just 50p an hour, with the gang pocketing most of their earnings.

The organisers also topped up their criminal takings by claiming benefits in the victims’ names without their knowledge.

It is estimated that the perpetrators made in excess of £2 million between June 2012 and October 2017 on the back of their victims’ suffering.

The trial judge described the operation as the “most ambitious, extensive and prolific” modern-day slavery network ever exposed in the UK.

West Midlands Police and the National Crime Agency launched an investigation into the network in February 2015 when two victims broke free from their captors and disclosed offences to slavery charity Hope for Justice.

Following a meticulous investigation that included 1,500 witness statements, senior investigating officer, detective chief inspector Nick Dale, said 92 victims had been identified, including three women. He suspects the gang may have exploited another 200 people.