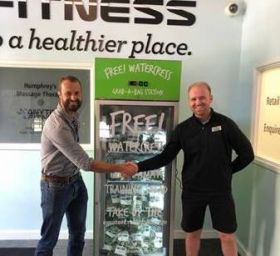 The Watercress Company is giving away surplus crop for free in Dorset gyms to encourage people to eat more watercress.

After strong yields this year, TWC said it was able to comfortably meet supply contracts leaving some stock to spare, with the company choosing to use its surplus crop to help encourage watercress consumption.

The company is delivering a fridge packed full of fresh harvested watercress to various gyms and sports clubs in the Dorset area, where members, staff and guests are encouraged to take a pack or two to experiment with in the kitchen.

The first venue to host the watercress fridge was Dorchester’s Anytime Fitness gym. On day one over 130 bags were taken, with a total of 450 bags taken between Monday to Friday, according to TWC.

Tom Amery, MD of The Watercress Company, one of the biggest growers of watercress in the UK with beds in Dorset and Hampshire said: “We are investing over £100,000 this year in promoting watercress and much of it is being invested in reaching the younger generation.

“We are prepared to give thousands of bags away for free if this is the only way to reach them, as experience shows that once tried, consumers become very loyal and buy it week after week.

“We grow loads of watercress every week and you can't predict blips in the market or stop crop flushes in warm weather so we've decided to give it away....bonkers, but if that's the only way to get new tasters, so be it!

“We have identified gyms and sports clubs as places where we can hit this target market with a clear message about achieving optimum sports performance that will strike a chord with them. If successful we will have dozens of fridges dotted all over the UK.”

The Dorset-based growers said watercress hasn’t faced the same production difficulties as brassicas this year due to its cultivation in spring water, which means it is able to withstand weather extremes.

The company said watercress isn’t impacted by short-term heat, being cooled by the temperature of the underground water, nor heavy rains.

“As a business we do also grow soil crops such as lettuce, spinach and other baby salad leaves so I appreciate first hand the pressures other growers are under,” Amery said.

“However, watercress never ceases to amaze me with the way it adapts to pretty much all weather scenarios ensuring a continually good crop throughout the UK season which lasts from May until November.”