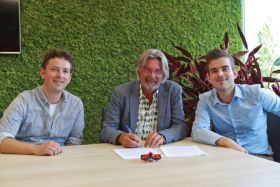 Koppert Cress has signed a deal with a Dutch tech company to supply them with “bat-like” drones to attack insects in the glasshouse.

Koppert announced it had teamed up with PATS Indoor Drone Solution, who will automate part of the crop protection process with its mini-drones which measure just a few centimetres across.

The agile drones actively hunt and eliminate flying insect pests such as Golden twin-spot moths, according to Koppert, as well as providing insight into the development of pests in glasshouses.

The deal will see the duo start with a test process in a separate growing area, intended to figure out the conditions on site for drones and help fine tune their crop protection.

Koppert Cress stated: “Sustainability is a top priority at Koppert Cress. The company wants to ensure a future in which socially responsible cultivation continues to be of high importance. Mechanical control of pest insects contributes to this goal.

“In addition to the sustainable working methods, PATS’ technology offers several advantages in insect control. This can be seen in the increased efficiency of human labour and the reduction of crop damages due to pests. This ultimately has a positive effect on the yields of this crop.”

PATS completed a drone trial earlier in the year at a flower nursery in southern Holland, with a new research project lined up to determine how much the drones can help reduce pesticides.

Co-founder Bram Tijmons said: “It will act as a targeted and preventive approach. In the next few years we will be adding support for different types of flying insects as well.”

Kevin van Hecke, co-founder of PATS and a drone researcher at TU Delft, added: "You can best compare our drones with bats, a natural enemy of flying insects."