Juices enjoy faster sales growth than any other sector in UK food and drink, while beer revenues slump 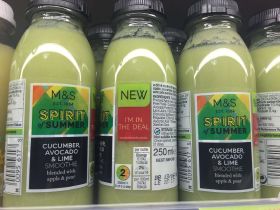 Fruit and veg juices have emerged as the fastest-growing sub-sector of the UK food industry, with sales rising 17 per cent in 2018, according to Santander’s analysis of the latest ONS Prodcom data.

Among all fruit juice drinks, sales of smoothies rose fastest, with people spending £112m on smoothies alone in 2018.

Food and drink remained the largest UK manufacturing sector in 2018, reporting sales of £71.8bn – a three per cent increase on the year before.

Andrew Williams, head of food and drink sector at Santander UK, said: “Food and drink manufacturing is vital to the health of the economy and the UK is widely seen as a global leader in product innovation.

“The last decade has seen the food and drink industry shaken up with huge shifts in consumer buying habits, from growing interest in veganism to juice and smoothie diets.

“Manufacturers are having to respond quicker than ever to develop new products to meet customer demand – a pattern which is likely to continue as Brits explore the latest food fads.”

An unusually hot summer and a shake-up of manufacturers’ product offering, including allergy-friendly and low-calorie options, boosted sales across the UK. The rise of consumers adopting a plant-based diet saw sales of vegan ice cream jump by 26 per cent.

Despite the surge in sales of fruit and vegetable and ice cream, British staples of cheese (£7.8bn), bread, cakes and pastries (£6bn) and processed meat (£7.9bn) held their place as the foods with the highest sales in the UK overall.

UK manufacturing remains the ninth biggest in the world, contributing over 45 per cent of all UK exports.