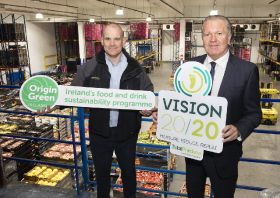 The company confirmed that as of 1 September, the group had switched to renewable energy sources to power its business units across Ireland.

The transition was implemented across 22 units, with 18 in the Republic of Ireland, and four in Northern Ireland, including central distribution centres, production facilities, regional depots and the group’s Dublin head office.

The company is partnering with Electric Ireland and Go Power to supply the green energy, with Captured Carbon verifying the energy source declarations.

Total Produce anticipates that the initiative, alongside additional carbon reducing measures already in place, will deliver a 40 per cent reduction in carbon emissions by the end of 2020.

“In Total Produce, we’re privileged that the products we sell; fresh fruits & vegetables, are associated with the smallest environmental footprint of all the primary foodstuffs, but we can always do more,” said Des McCoy, managing director of Total Produce Ireland.

“Our transition to renewable energy demonstrates our ongoing commitment to reducing ever further our impact on the environment and is but one component of a broader suite of measures being put in place as part of our ongoing journey towards becoming an ever more sustainable company.”

The switch to renewable sources is part of Total Produce’s Vision 20/20, a company-wide initiative dedicated to measuring and reducing carbon consumption throughout the group internationally.

At this year’s Fruit Logistica, in Berlin, Total Produce also achieved carbon neutrality for its combined travel emissions, through a carbon offset scheme.