Agrial’s first UK-owned production site is a statement of the company’s bold ambitions. Ed Leahy visits the Essex location to hear how one of Britain’s biggest salad suppliers is facing up to the future 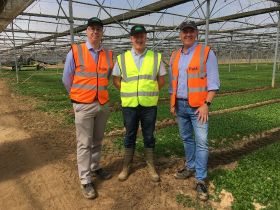 On every plantlet of Agrial-grown lamb’s lettuce plucked from the soil and packed for consumption, the tiny leaves on the stalk remain intact. Packed into bags of Florette-branded salad, the plantlets somehow survive the harvesting, transport and packing process despite their fragility.

In an industry replete with fragile goods, the cotyledons’ survival in the face of some hefty machinery is a reminder of the care that British horticulture takes in quality. “It’s one of the most difficult crops I think I have ever grown in my career,” reflects Rob Corlett, Agrial Fresh Farms manager. “You need to get the whole plant.”

It’s something the average consumer is unlikely to notice, but for the growers, it’s a sign of a quality in a market facing greater demand. Lettuce is on the up – people want more of it, and they want it cheap too, a balance that growers across the industry are battling to strike.

In response to this demand, Agrial Fresh Produce UK, the British produce arm of the French multinational business, Agrial, made its first foray into growing, buying Angflor’s lettuce and vegetable operations in January this year, situated just outside Colchester, and rebranding it Agrial Fresh Farms.

The sensitivity of the crop makes it a rare specimen on these shores and Agrial Fresh Produce’s managing director, Doug Robertson, says their site’s scale is unmatched outside of France. “It’s without a doubt, one of the largest production sites of lamb’s lettuce probably outside of Nantes in France.”

Agrial’s Essex operation began life in 2013 with 11 hectares of production, then under the banner of Angflor, with Jepco producing the crop for Agrial. The site grew over two years to a combined 28 hectares, predominantly for lamb’s lettuce, with rocket, and spinach over the winter.

It’s a year-round operation, with Corlett and 12 staff managing six cycles per year of lamb’s lettuce, meaning the entire operation produces from 110 hectares in 12 months. That equates to nearly 600 tonnes of crops.

“A lot of work was done on why this location is the the right place. Eventually after a lot of to-ing and fro-ing, and looking at weather data. This site was chosen because it has the highest light levels in the UK. It is slightly warmer and there are other key growers in the east of England for that reason.”

Robertson adds: “This also happens to be Agrial’s first UK-owned farming operation, it’s their first foray into growing for the group in the UK, not just a contracted operator, it’s very important to the business in terms of how we want to expand.”

One of the key gains from having a lamb’s lettuce site in the UK was to limit supply risk. “Supply crises with salads are a fairly regular beast. If we can mitigate that, that obviously helps,” notes John Armstrong, marketing director for Agrial Fresh Produce. “We’re looking at all year round production as far as the weather allows, that’s essential to what we want to do, we want more flexibility in terms of what we can supply the factories.”

Corlett enthuses about the potential for Agrial Fresh Farms to become a bastion of smart farming, but it is already a sophisticated setup. Each protected block (made from a polytunnel material with a glasshouse-like structure) is linked to a central computer which automatically regulates light levels by opening and closing blinds hung above the plants.

With six rotations of lamb’s lettuce grown each year on a single patch of soil, the turnaround is quick. From drilling to harvesting it can take just 30 days in the summer, and around 100 days in the winter. Before drilling, the soil is also steamed using an automated tractor with giant wings on either side which push scalding steam through the soil, working 18 hours a day. The soil is then coated with a thin layer of sand, which encourages the lettuce’s stem to grow tall enough for the harvesting machinery to cut with the cotyledons and whole plant kept intact.

“There’s so much out there at the moment and it’s now coming into Europe, like different coloured plastics, different types of plastic that let certain UV light levels through. There are endless amounts of things we can do and we’re looking at that now,” Corlett continues.

The level of investment involved in the purchase and development of Agrial Fresh Farms, is all the more bold in the face of ongoing Brexit uncertainty. But it’s exactly the kind of project Agrial is looking to build its portfolio with.

“One of Agrial’s long terms goals is to have a wider reach and be more international,” reflects Robertson. The entire corporation has a combined turnover of £5 billion, made up of five divisions: meat, dairy, beverages, agriculture and fresh produce. In total the company employs just shy of 23,000 staff, working across the globe.

Its UK arm Agrial Fresh Produce operates across five sites in the UK, employing 1,262 people with a turnover of £130m. Through its brand Florette, the company dominates the salad shelves in UK supermarkets, competing against retail own-label products. In recent years, the company has sought to take the creative lead through a series of convenience-based products, such as ready-to-eat beetroot bags, and more recently green beans in garlic butter microwaveable bags.

“The key challenge at a brand level is in what we are bringing to the category. There’s no point doing what everybody else is doing. We’ve spent a lot of time this summer in front of consumers trying to look at how we develop the brand as a focus.

“The main thing that came back is that salads had become mentally commoditised. Consumers have switched off, and we’ve seen a fairly significant drop in the market price, which is not sustainable long term. Retailers have been putting out bags at 39p and 49p; three years ago they would have been over a pound.”

Armstrong says the best card Agrial has in the game of fresh produce is therefore an ability to drive shoppers towards to the salad category, something which appeals to the retailers. “If we’re talking to customers and they ask why they should stock us, it’s because it will help them sell more salad. If people are more engaged with salad they will use it with more occasions,” Armstrong says.

Nevertheless, margins remain tight, and it’s hitting other businesses hard. “A couple of operators have fallen out of the industry in the last 18 months. Because of the scale we have, we are in a good position commercially. People are using more salad, penetration is up at the 80 per cent level, and in the last three years another quarter of million people came into the market, so that’s good.”

PREPARING FOR A PRECIPICE

The sheer scale that Agrial can call on will still be stretched this autumn however, as Britain faces one of the biggest economic upsets in its history with Brexit, and fresh produce is in the firing line. Friction at the border is the first concern.

“It won’t be the fact that our paperwork isn’t in order, or that we haven’t done the right custom declarations, it will be someone in front who has turned up at the port without the right paperwork, and that will be our biggest challenge,” says Robertson.

Brexit is forcing UK-related businesses across the world into a game of investment poker: do they continue investing at greater risk, or batten down the hatches until it blows over? For production, Agrial has chosen the latter in a bid to stave off the danger of hold-ups, by producing more during the crucial autumn period when UK salad and lettuce supply switches to European stock.

“Brexit is in week 44 which is our transition period, and salad transitions between UK supply and continental Europe, so we are going to grow more UK product this year. It’s possible at that particular point in the year because you still have reasonable growing conditions, but it’s not without risk.

“At that time of year it could be a bright autumn day or lashing down for three weeks, but we are taking a conscious decision to take a bit more risk than we normally would do, to have at least some flexibility in having a reasonable amount of UK availability during that window.”

The company has sought other ways to dampen the shock of Brexit. Achieving Authorised Economic Operator (AEO) accreditation which is a kind of trusted trader scheme, to help companies speed up the import/export process. “It allegedly gives you priority through ports of entry, it’s a bit of a fast-track for customs,” says Robertson.

There is also the Transitional Simplified Procedure (TSP) launched by Theresa May’s government as means to simplify the customs process. For those looking to the TSP as a wonder solution, Robertson adds that since the new government’s arrival, it remains to be seen whether TSP will be implemented, and it won’t change the fact that customs declaration will still be conducted, restricting the flow of traffic on the Calais-Dover route. Almost all fresh produce businesses have thus been busy scheming alternate import routes following October 31.

“The one good thing about the 11th hour decision not to come out of Europe in March was that it was a good practise run. We were at that point reasonably on top of those alternate routes,” reflects Robertson.

Whatever travails ensue after Brexit, open any Florette bag containing lamb’s lettuce and those tiny leaves will still remain intact, symbolising perhaps the commitment of Agrial and the wider industry to keep producing their best amid a broad array of challenges.