Wageningen professor becomes the first woman to deliver the keynote address, which takes place at Guildhall on 20 February 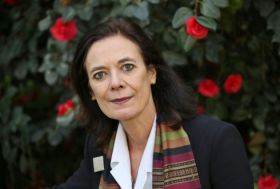 One of the foremost global thought leaders in the food industry will deliver the City Food Lecture 2020.

Dutch scientist, academic and broadcaster Professor Louise Fresco will bring her candid style to next year’s lecture, which takes place on Thursday 20 February at London’s Guildhall.

A highly influential thinker and commentator on global food issues, Fresco is president of the executive board of Wageningen University & Research, Europe’sleading academic agri-food organisation and research and development centre.

She has served on the boards of Rabobank, Syngenta, and Unilever as well as serving as a trustee of the Shell Foundation. Her successful book: Hamburgers in Paradise, the stories behind the food we eat, has been translated into several languages.

Fresco is uniquely qualified to take up the mantle of City Food Lecturer, a role previously performed by food industry leaders such as Dominic Blakemore, group chief executive of Compass Group, Tesco CEO Dave Lewis and former Cadbury Schweppes chairman, John Sunderland. Fresco will be the first woman to have delivered the flagship address.

The City Food Lecture is one of the most prestigious events in the food industry’s calendar and is supported by premium sponsor Rathbone Investment Management. It is organised by the seven City of London Livery companies involved in agriculture and food: the Worshipful Companies of Bakers, Butchers, Cooks, Famers, Fishmongers, Fruiterers and Poulters. It brings together on the night 650 industry leaders, academics and liverymen.

City Food Lecture organising chairman John Giles said: “We are incredibly excited to welcome Professor Fresco to the City Food Lecture. She has a wealth of knowledge and an authoritative perspective on the past, present and future of the food industry. I am confident her presentation will provide serious food for thought to all who attend.”