Port of Liverpool to invest £17m in terminal upgrade 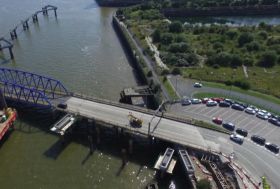 Terminal operator Peel Ports has announced plans to invest £17 million in the Port of Liverpool's RoRo facilities to boost its trade capacity.

The project by Peel Ports and Stena Line at Twelve Quays terminal in Birkenhead will see the dock expand its service to next-generation RoRo ferry vessels. The plan is to reduce turnaround times, increase route capacity and improve health and safety by switching to one-way traffic.

The revamped terminal is expected to be fully operational by January 2020, ready to welcome Stena Line’s new fleet of E-Flexer ships on the Belfast-Liverpool route in the spring. This follows a multimillion-pound investment in the Merseyside region as part of a 25-year commitment.

David Huck, managing director of group ports at Peel Ports, said: “The past two years have seen heavy investment in the infrastructure at Twelve Quays to offer enhanced berthing facilities for larger, more modern vessels, helping reduce turnaround times and open up opportunities to grow the region’s import and export offering by expanding capacity by 20 per cent.

“It’s also allowed us to extend our long-term partnership with Stena Line as it takes the next steps in its major fleet investment programme, with freight and travel customers able to take advantage of faster and easier loading and unloading.”

Stena’s new E-Flexer ships are larger than today’s standard RoPax vessels and will provide freight capacity to carry 120 cars and 1,000 passengers and crew. Peel Ports added that the ships are also “highly fuel efficient” and will help reduce emissions.

Other upgrades include a new multi-level berth to accommodate double-deck, simultaneous vehicle access to and from vessels, as well as bigger berthing facilities for importers and exporters.

In another major investment project at the port, civil engineering firm McLaughlin & Harvey has been awarded the contract to deliver the next phase of development at the Liverpool2 deep-water container terminal.

The multi-million project will significantly increase the footprint of the site and see the addition of ten cantilever rail mounted gantry cranes (CRMGs) and three ship-to-shore cranes (STS).

The STS cranes are scheduled to arrive in November 2019 with the overall project expected to be completed during 2021. Detailed design and preparatory civil works have already commenced.

There will also be additional reefer points installed to allow the terminal to handle even greater quantities of refrigerated containers at the Port of Liverpool.

Opened in November 2016, Liverpool2 is a £400m investment to provide an ocean gateway for UK importers and exporters to countries across the Atlantic Ocean.